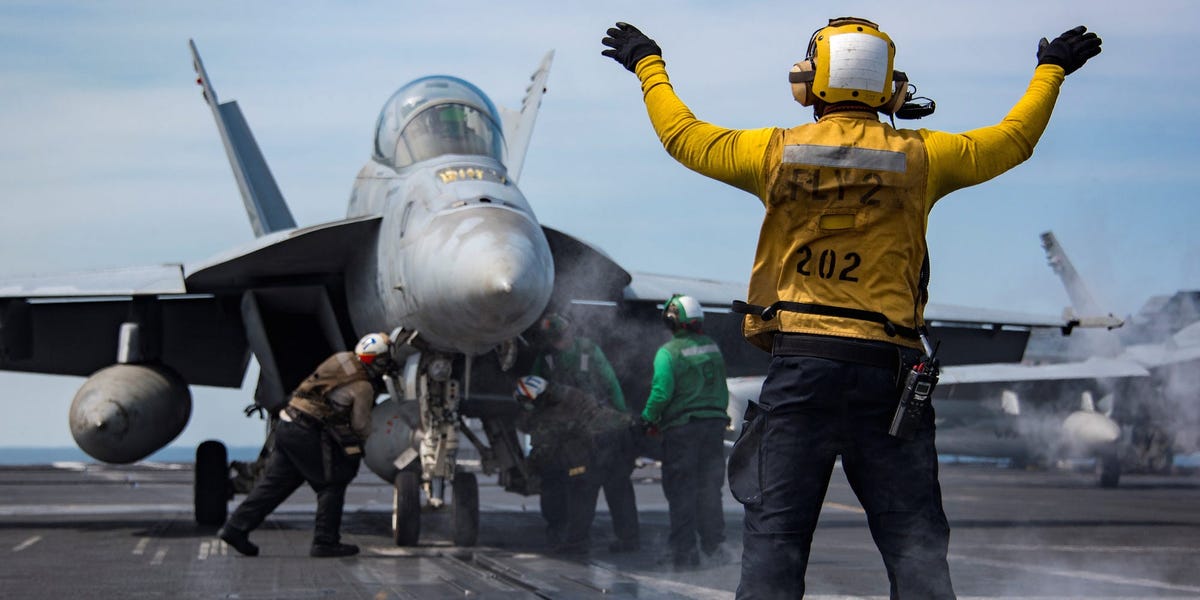 After observing the operation of the cockpit for a moment, it is clear that only one jersey color is in charge of the big dance: yellow.

Aviation Crewsmen (Handling), commonly referred to as Yellow Shirts, who work on the flight deck of the USS Nimitz aircraft carrier are directly responsible for the handling and maneuvering of aircraft as well as the safety of all personnel during flight operations. Any error or lack of judgment can cause damage to equipment or injury to personnel in the cockpit.

“At first being a yellow shirt was scary, but now that I have some confidence, I would say there’s a sense of pride,” said Melanie Cluck, Aviation Boatswain’s Mate (Handling) 3rd Class, of Palm Springs, Calif. “On the flight deck, we are not only responsible for directing planes, but also for directing people. Normally, anyone who needs advice on the flight deck is looking for a yellow shirt. The safety of everything the staff on deck are also a big part of our job.. So we don’t just need to know our job, but everyone else’s.”

Before donning the sought-after yellow jersey, ABH wear blue jerseys to indicate that they are currently in a more junior status.

These sailors are normally newer airmen who have not yet acquired all the necessary qualifications. Their primary responsibilities during flight operations include rigging and chaining, driving elevators, and driving tractors.

“Being a blueshirt is hard work, but it makes you tough,” said Airman Michael Lothrop of Atlanta. “It’s hot up there right now, and we’re working long days, but you need to be alert at all times and ready to get the job done whenever you need to.”

Blueshirts are normally covered in grease and always carrying something heavy, be it a chain, a tractor bar or a chock. They play an important role in maneuvering aircraft on the flight deck, as they do most of the hands-on work.

While wearing blue, they learn the ins and outs of proper aircraft steering, which helps lay the foundation for a high-performance yellow shirt. Since the job requires exacting attention to detail and an extreme amount of knowledge to perform well, the training and number of hours a sailor must put in to become a yellowshirt is impressive.

“There are two main qualifications you get as a blueshirt, but from there it’s all about whether your chain of command sees you have the initiative to take a yellowshirt,” Cluck said.

The qualifications required are those of cockpit observer, steering and handling in addition to any qualifications that sailors must obtain when reporting to Nimitz.

Once a sailor is granted the right to wear the color yellow on the flight deck, they will enter Under Inspection (UI) status. This means they need an experienced yellow shirt to help them become an expert in their new job on the flight deck.

“It’s on a case-by-case basis over how long the UI process takes,” Cluck said. “The process is just there to make sure you fully understand what you’re doing on the flight deck. It’s a lot of work, to say the least, but it helps you build your character. The point of the process is simply to prepare you to be the super yellow shirt that you are meant to be.”

A UI yellow shirt always comes with a seasoned mentor who watches every signal and decision they make to ensure they learn the process.

Yellow shirts must communicate with pilots and other personnel working on the flight deck with hand signals to move planes onto catapults and out of the landing area safely.

“You have to be able to really control your plane and understand the pilot,” Cluck said. “It’s an instinct that you develop during your training, if you feel like you need to slow the plane down, you can, and you start to learn when exactly to turn it. We have hundreds of hand signals that we can use to take control of the plane.planes on the deck.People sitting in the pilot seats are officers so you must be professional and every move you make must be sharp and precise to avoid accidents.

The working environment of a yellow shirt is unlike any other on the ship. The yellow shirt locker, or crew area, is located on the flight deck of Nimitz. A tight-knit group of men and women who spend their time out of the scorching heat joking, laughing, and getting ready to launch a multi-million dollar plane into the sky.

This is where the most dangerous ballet instructors in the world reside. It is here, where the yellow shirts dwell, mentally preparing to launch planes as their ship currently sits at the tip of the spear.

This history of the United States Navy was first post in August 2017.

Hilarious moment Davido scolded Isreal DMW for taking his shirt off at a club, ordering him to put it back on

Are payday loans a bad idea?