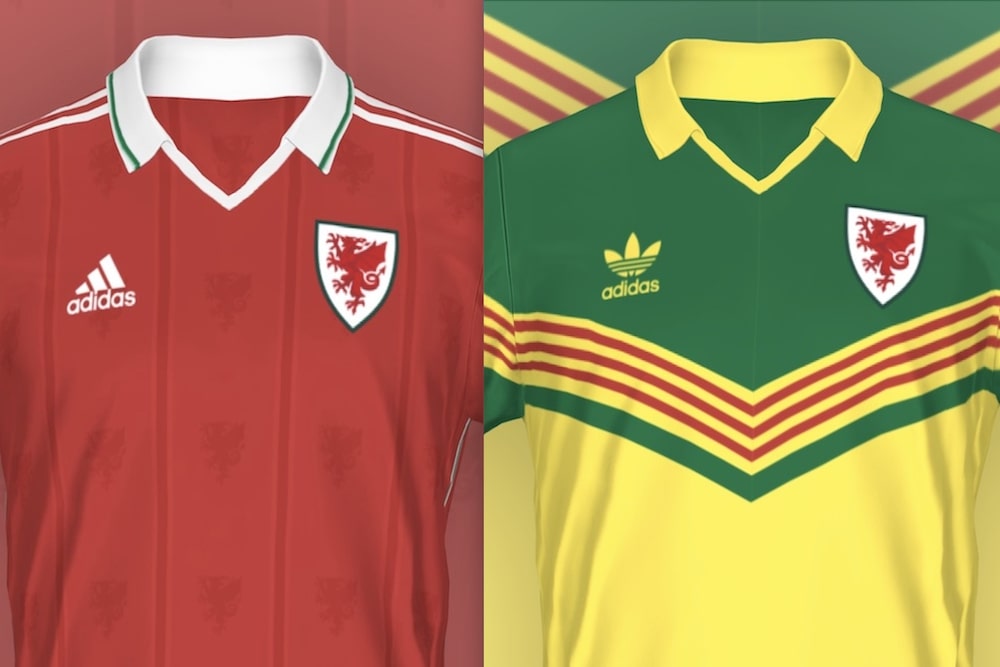 These Wales football shirts are causing an internet sensation

We’re not saying these are great football shirts, but if the New Wales World Cup shirts are anything like these, we certainly won’t be disappointed.

These concept shirts designed by these creative guys at www.designfootball.com received an overwhelmingly positive reaction when they were picked up by Wales fans on social media, with many saying how much they loved them jerseys.

While Adidas unveils new shirts for Premier League sides Manchester United and Arsenal – both of which feature collars, the New Wales kit has been similarly imagined with a collar.

While the home kit features dragon designs all over the shirt, the away kit is a retro nod to old Admiral shirts from the 1970s.

Of course, ask any Wales football fan what they’d like to see a New Wales kit look like – and pretty much most would point to classic kits from days gone by.

The 1970s Admiral kit and the 1980s Adidas kits are particular favourites.

Now, we don’t have any definitive news on the new World Cup kit, except that it’s believed to be released in late August/early September.

However, earlier this year Football Association of Wales chief executive Noel Mooney appeared to be teasing a new kit with a nod to his much-loved retro ancestors.

Mooney has made a positive impression since taking over as FAW chief executive in August last year, building relationships with grassroots clubs and fans across Wales.

He may also have recognized the upsurge in retro kits being worn in Wales, with replicas of those 70s Admiral and 80s Adidas kits becoming more visible with every game.

Could we then see a new kit that is an update to an old classic?

If the GM’s Twitter posts are relevant, then you’re wondering.

First there was this post featuring an iconic image of resplendent and iconic Wales defender George Berry in the 70s Admiral of Wales training top.

Then there was the latest Christmas article featuring Welsh legends Ian Rush and Mark Hughes in these favorite 1970s Adidas shirts.

The reaction to both posts was, as you can imagine, overwhelmingly positive, with fans pleading with the new GM to “take my money”, “do it”, and if “it happens you’ll make my year”.

No pressure then. (But please make it happen, Christmas!)

“The man who has so many shirts, but can never find one”