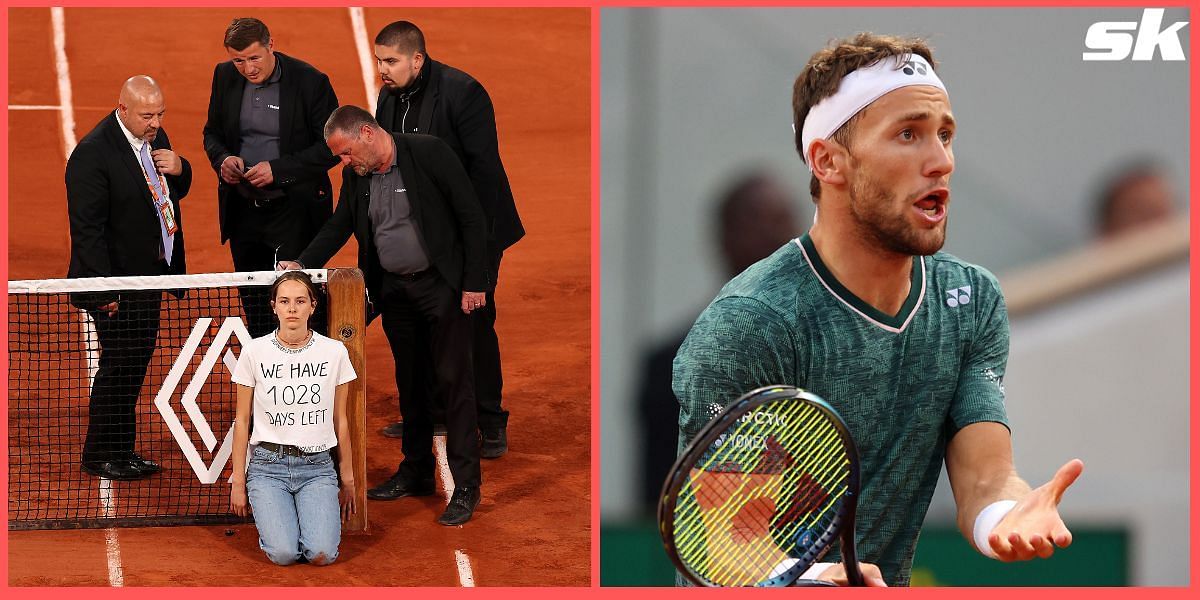 Friday’s men’s French Open semi-final between Casper Ruud and Marin Cilic was halted for 15 minutes after an environmental activist entered the pitch and chained herself to the net.

The incident took place in the third set as Ruud led Cilic 3-6, 6-4, 4-1. Both players were escorted to the locker room while security intervened to resolve the issue.

France’s Last Renovation organization claimed responsibility for the protest and said Alizée, the 22-year-old protester, entered the court “to draw attention to the climate emergency”.

“22-year-old Alizée stepped onto the tennis court during the Ruud-Cilic semi-final to draw attention to the climate emergency and the demand for the Last Renovation campaign,” the tweet read.

In a press release published on the group’s website, Alizée said that she had interrupted the procedure before the Philippe-Chatrier court because she could “no longer take the risk of doing nothing in the face of the climate emergency”.

“We are in 2022 and it is time to look reality in the face, the world in which the politicians send us is a world in which Roland Garros will no longer be able to exist. Today, I entered the field because I do not I can no longer take the risk of doing nothing in the face of the climate emergency, ”we read in the press release from Alizée.

Alizée wore a white t-shirt with a message that read “We have 1028 days left”. This message is believed to have referred to one of the recent UN climate reports.

The band’s website also featured an explanation of the message with an updated countdown.

“1026 days is what we have left to determine the future of humanity. Less than three years. The countdown began on March 28, 2022, the end of the ultimatum sent by Last Renovation to the government , and the date on which citizens entered into civil resistance. France has been condemned by its own courts for its climate inaction. The future of this country is literally destroyed. To waste time is to perish,” it reads. in the message.

The French Open has also had its share of interruptions in the past, including the 2009 final between Roger Federer and Robin Soderling, and the 2013 title clash between Rafael Nadal and David Ferrer.

Rafael Nadal for his 14th Roland-Garros final, against Casper Ruud on Sunday

Read also
The article continues below

Rafael Nadal booked his place in the 2022 Roland Garros final after world number 3 Alexander Zverev suffered an unfortunate injury and was forced to withdraw from their semi-final clash. Sunday’s top-flight clash will mark a record 14th final appearance in Paris for the Spaniard.

This will be the first meeting between Nadal and Ruud, who is training at the Spanish academy in Mallorca.

Schapiro: A payday loan battle that started in Virginia with a whimper, ended with a bang | Columnists