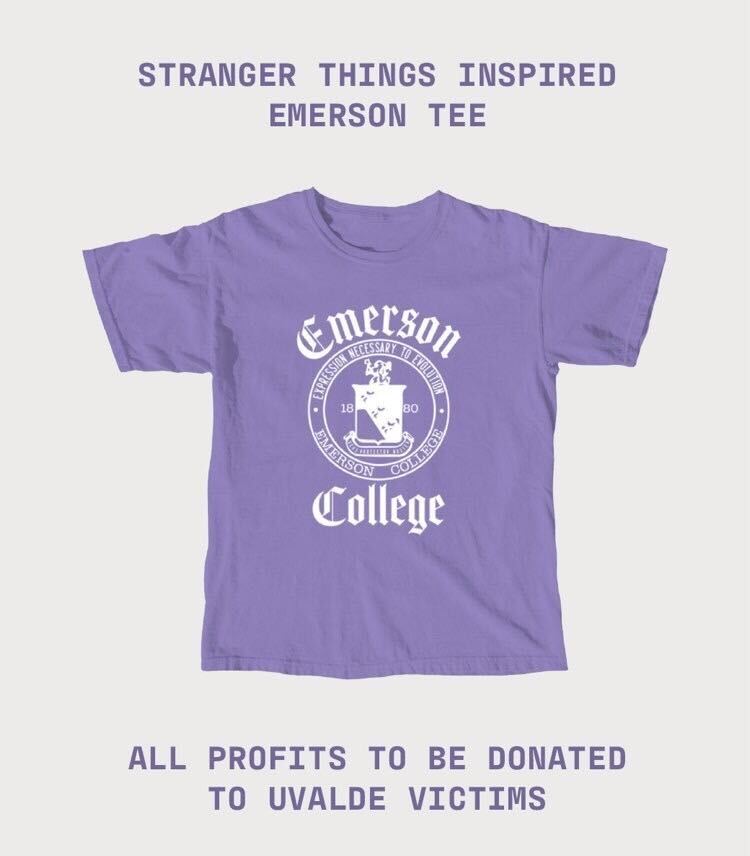 SAN ANTONIO, Texas (KXAN) — A Texas college student has raised thousands of dollars to benefit the families of Uvalde shooting victims after recreating a t-shirt she saw on a popular Netflix show.

Reagan Allen grew up in San Antonio and now attends Emerson College in Boston. She said her social media feeds were flooded with excitement after people watched the new season of “Stranger Things” when it released on May 27 and saw one of the main characters, Nancy Wheeler, wearing a vintage purple shirt from Emerson.

“Everyone was really excited about the jersey, and they were kind of looking for places to buy it,” Allen said. “I’m a graphic designer, so I jumped [Adobe] Illustrator, and recreated the logo in about 20 minutes.

Three days before the release of the new season, a gunman killed 19 students and two teachers at Robb Elementary School in Uvalde, a community about 90 miles west of Allen’s hometown. She said the tragedy there came to her mind when she thought about how she could sell the shirt. She decided to create an online fundraising campaign through a company called Bonfire, which allows people to sell custom shirts and then collect profits later to donate to a cause.

Allen – an Emerson senior specializing in writing, literature and publishing – has now raised almost $31,000 through the sale of T-shirts through the Bonfire campaign site. The shirts are $27 each. Once the campaign is over, she said all proceeds will go to the VictimsFirst fund set up after the deadly school shooting to help victims’ loved ones. This particular fundraiser has already raised more than $6.1 million from 81,000 donors, according to the GoFundMe page.

She said she initially ended the campaign after hitting the $25,000 mark, which she called an “edifying” milestone. However, she decided to open it again after hearing from someone unexpectedly that same night.

“I received a message from a girl I went to high school with whose family was directly affected by the tragedy,” Allen said. “It really drove home the impact this campaign has had. I’m so grateful to the Emerson community for supporting me on this. It’s so humbling, and I’m so grateful.

It’s unclear how long the fundraiser for the t-shirts will last. Emerson College has allowed Allen to license its logo until Aug. 1, she said. Michelle Gaseau, Senior Director of Strategic Communications and Media Relations, released a statement supporting Allen’s fundraising effort.

“Emerson students have long been known for their creativity and civic spirit,” Gaseau said. “This project certainly falls into those categories, as the student has indicated that proceeds will go to the Texas Elementary School Shooting Victims Fund. The College is proud when students take initiatives and support such causes.

Allen said she and her two younger sisters cried together after learning of the shooting and were heartbroken for the families of the victims and their community. She hopes the donations will help them and remind them of how many people wish them well.

“These families are going through such an inconsolable thing,” she added. “[I hope] that they can feel the support from across the country, from around the world, from communities like mine – in a monetary sense and also just in a deeper sense. I hope they can still feel that there is good.

Allen is also looking forward to returning to Boston this fall and seeing people on campus wearing the purple Emerson College shirt she designed. She also said she heard some of the producers behind “Stranger Things” bought shirts.

“At times like this, you feel so frustrated because you feel like you don’t have pathways to make real change, but you do,” she said.