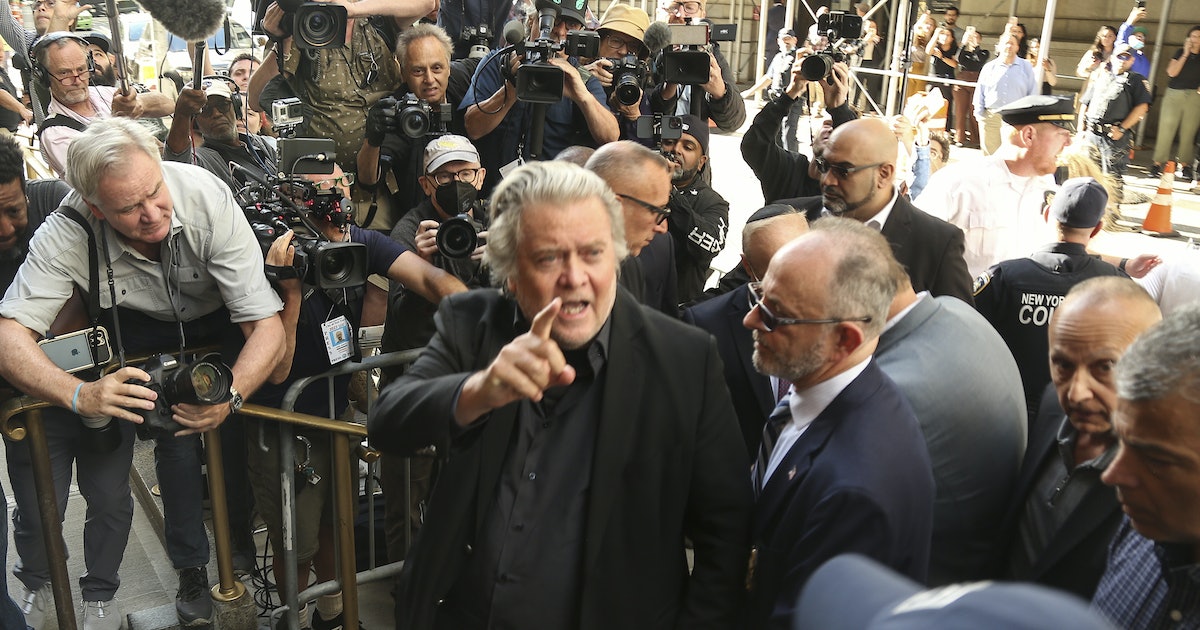 Steve Bannon, the architect of former President Donald Trump’s political reign with a soft spot for white nationalist views, surrendered to prosecutors in New York on Thursday, where he was slapped with charges stemming from his alleged involvement in a multi-million dollar scam to trick gullible xenophobes into thinking they were funding the construction of the border wall between the United States and Mexico.

Smiling and defiant, Bannon arrived at the Manhattan District Attorney’s office, lecturing the gathered crowd of onlookers and rowdies as he walked inside, swearing he had “not started to fight” and “they will have to kill me first”.

Shortly after his arrival, prosecutors announced that Bannon would face first- and second-degree money laundering charges, as well as conspiracy charges., for his role in the “We Build The Wall” crowdfunding project, which federal investigators accused in 2020 of being a long-running fraud and money laundering operation. Bannon himself was accused of siphoning off around $1 million of the total $25 million raised for the project for his own personal expenses, and he was arrested by federal agents while on vacation. on a yacht owned by a Chinese billionaire. In one of his last acts in office, Trump pardoned Bannon before he could be convicted in the case, prompting the Manhattan District Attorney’s Office to look into the charges against the State Thursday.

In a statement earlier this week, Bannon accused prosecutors of playing politics with his pending indictment, saying the prosecutor’s office “has now decided to pursue false charges against me 60 days before the midterm elections. “.

The sense of deja vu surrounding Bannon’s latest legal entanglement has been reinforced not only by the repetitive focus on his alleged financial role in the wall-building project, but also by the fact that it’s only been a few months since he was convicted in a separate case stemming from his refusal to testify before the House committee investigating the January 6 uprising. It seems the only thing Bannon enjoys more than undermining democracy and wearing multiple polo shirts at once is being accused of crimes.