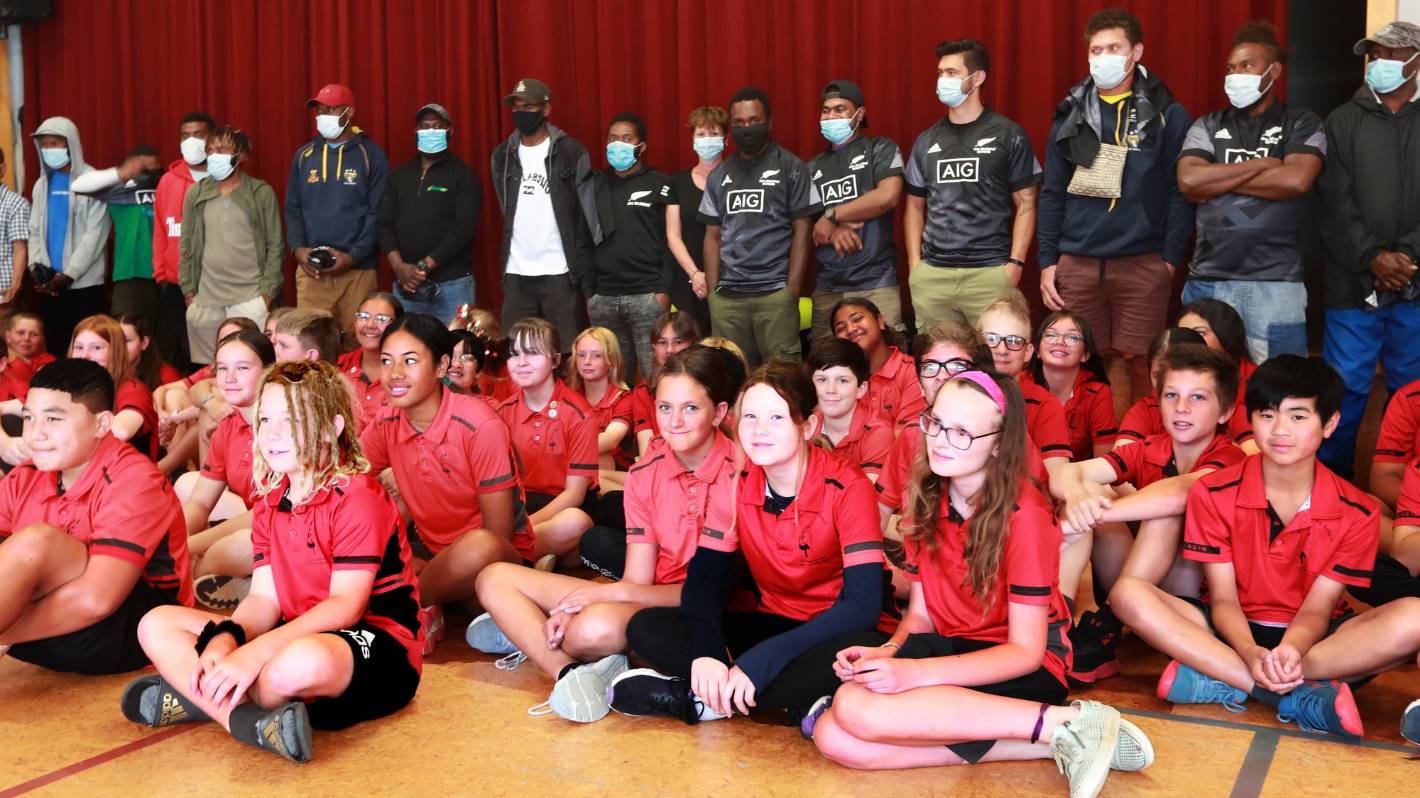 Christmas came early for a group of seasonal workers in Marlborough who lost their families, thanks to a bright idea from the students of Redwoodtown School.

About 400 seasonal workers, nationwide under the Recognized Seasonal Employer (RSE) program, each received an All Blacks jersey from the students as a Christmas present.

Students chose workers as unsung community stars, as part of a community project run by the Graeme Dingle Foundation’s Kiwi Can Program, in which students seek to give back to the community in some way. another one.

Easter Petaia, 13, on Tuesday welcomed a group of about 22 Hortus CSR workers into the Redwoodtown school hall, declaring on behalf of her grade 7 and 8 classmates that they wanted to thank the workers for all their hard work in Marlborough.

READ MORE:
* The village of Marlborough supports the villages of the islands
* Vine idea mobilizes support to bring goods back to Vanuatu safe and sound
* Wairau school has a bee that works with a difference
* Southern high just below 90 percent double dose

The workers were from Vanuatu, the Solomon Islands, Papua New Guinea and Fiji, and the students realized that many of them had not been able to return home with their families before the borders were closed in early 2020. .

While keeping the vineyards and the regional economy running during the difficult pandemic, the students felt that the workers had sacrificed a lot for the good of the region and wanted to recognize their hard work with a thank you gift.

After waiata, the students and workers mixed in a circle and played one of the students’ favorite energizing games called Shebang, which the workers picked up on very quickly, and there were giggles all around.

Then 13-year-old Lusia Anderson led the presentation of the shirts, from student to worker.

On behalf of the workers, Francis Pulo thanked the students for recognizing their hard work and sacrifices.

He had young children at home in the Solomon Islands and they would miss him at Christmas while he worked during the summer season.

Although it is difficult to be away from their families, especially during the holiday season, he said he felt like he had started a new family in Marlborough.

Graeme Dingle Foundation regional director Kelvin Watt said the community projects, carried out in 17 Marlborough schools, were to encourage a new era of community-minded young people and instill a culture of volunteerism in Marlborough.

“Kiwi Can’s ‘community projects’ engage young people from an early age to do something for the good of their community and to feel the satisfaction and reward of contributing. It’s a powerful trick!

The Graeme Dingle Foundation was in its third year as the official charity of choice for New Zealand rugby, and the New Zealand rugby team and Adidas were able to help the students with their freebies.

More shirts would be distributed to around 400 workers in total.

Chelsea star tagged ‘worst shirt ever’ after posting against Everton