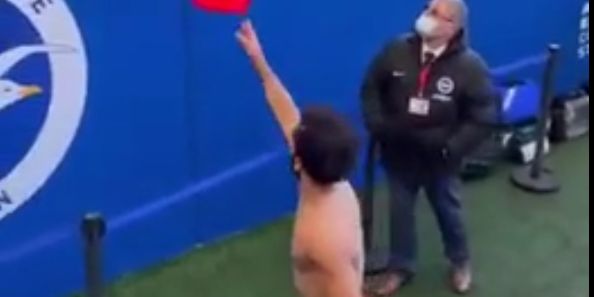 Mo Salah throws his shirt at a lucky Brighton fan

Mo Salah signed up on the scoresheet amid contract speculation which saw him in the pre-match headlines.

Thankfully, post-match newspaper articles will talk about his penalty which doubled Liverpool’s lead – although there was an injury scare which saw him walk off the pitch.

Fingers crossed the injury won’t be too serious and won’t see the Egyptian king miss any first-team playing time.

READ MORE: ‘Ali is a world-class goalkeeper’ – Jurgen Klopp on Alisson Becker after his late save against Brighton and Hove Albion

When our No.11 headed down the tunnel for foot treatment, a Brighton supporter shouted for his shirt and to their surprise they got it.

There will be many of our supporters who will be jealous to see the shirt go to a fan of another team but it was probably the shameless confidence of the person in the stands that saw them rewarded with the shirt.

We can only hope his goals continue and the speculation ends soon.

You can watch the video of Salah and the Brighton fans via Reddit user u/EuropeanGuy12:

As Salah walked down the tunnel a Brighton fan asked for his shirt, Salah smiled, took it off and threw it at him. of Liverpool F.C.

#Ep39 from The Red Nets podcast: Should we be worried about Mo Salah? Overview of Brighton… and more!