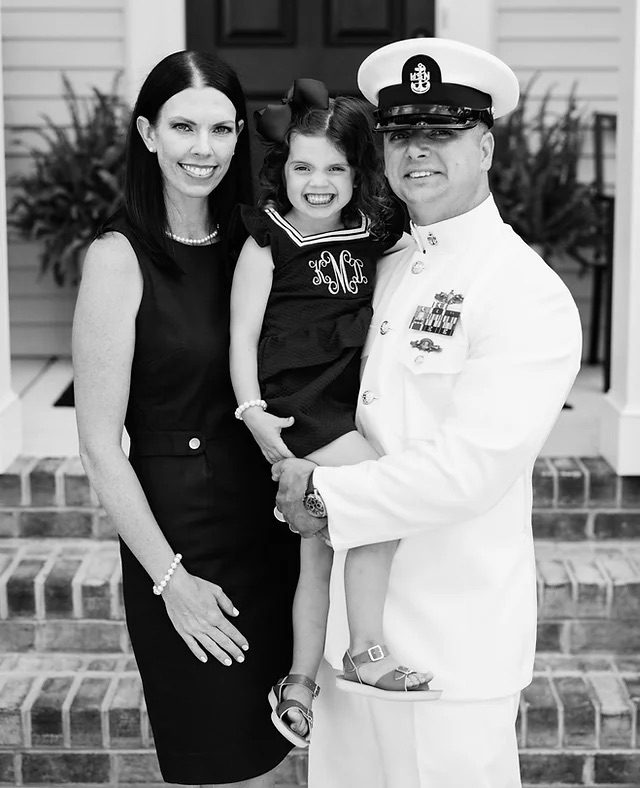 WILLIAMSBURG — A local family has built a brand that revolves around the concept of “daddy girls,” while honoring the military community.

The t-shirt company, Heroic Apparel, was founded last year by Jason McNeely, who has been on active duty in the Navy for 15 years.

Based in Toano, Heroic Apparel was created for Jason’s daughter, who was four at the time.

“It was different having a daughter in the military,” Jason said. “I started the t-shirt business on a whim. I had the original daddy girl concept that I loved, because obviously I’m a daddy girl. And then we just started selling more shirts.

“When we started it was just kind of a hobby and something we thought we could do just to show our daughter that there are other paths to success in life,” Brandi said.

Phrases and symbols printed on the clothing represent the McNeelys’ love of the military and family, such as “Girl Dad” and “Patriot”.

Their daughter even has her own role in the business.

“She’s, like, completely involved,” Jason said. “She writes on packing slips and affixes shipping labels to bags. She likes it.”

Heroic Apparel has now reached a selling point of partnering with a non-profit organization that shares the company’s values.

$10 from every sale of their “Patriot” shirt goes to Operation Camp, a nonprofit organization that sends children of fallen service members to summer camps across the country.

The organization helps children, also known as “Gold Star Children”, heal from the loss of a parent by sending them to a summer camp of their choice and relieving them of stress for a period of time. weather.

Jason and Brandi said the organization’s mission also aligns with theirs.

“I couldn’t imagine my daughter growing up without me,” Jason said. “I just think we don’t talk about these kids enough.”

“The goal of sending Gold Star kids to camp helps them through this transition of losing a parent,” Brandi added. “And the stats show that going to summer camp helps kids deal with those kinds of things.”

“I just took one of the shirts I had recently designed and started printing,” Jason said. “So we decided that $10, basically all of the proceeds from every shirt sold, would go to Operation Camp.”

With Jason still on active duty and Brandi pursuing full-time careers, the two currently run Heroic Apparel in the spare pockets of their day. However, they focus their efforts on expanding the business.

“We’ve grown tremendously even in the last six months, and I think we’ve realized that’s actually something we can turn into a viable business,” Brandi said. “Just getting our name out there in our local community is hugely important as we hope to grow this into a self-sustaining business.”

To learn more about Heroic Apparel, visit the website.