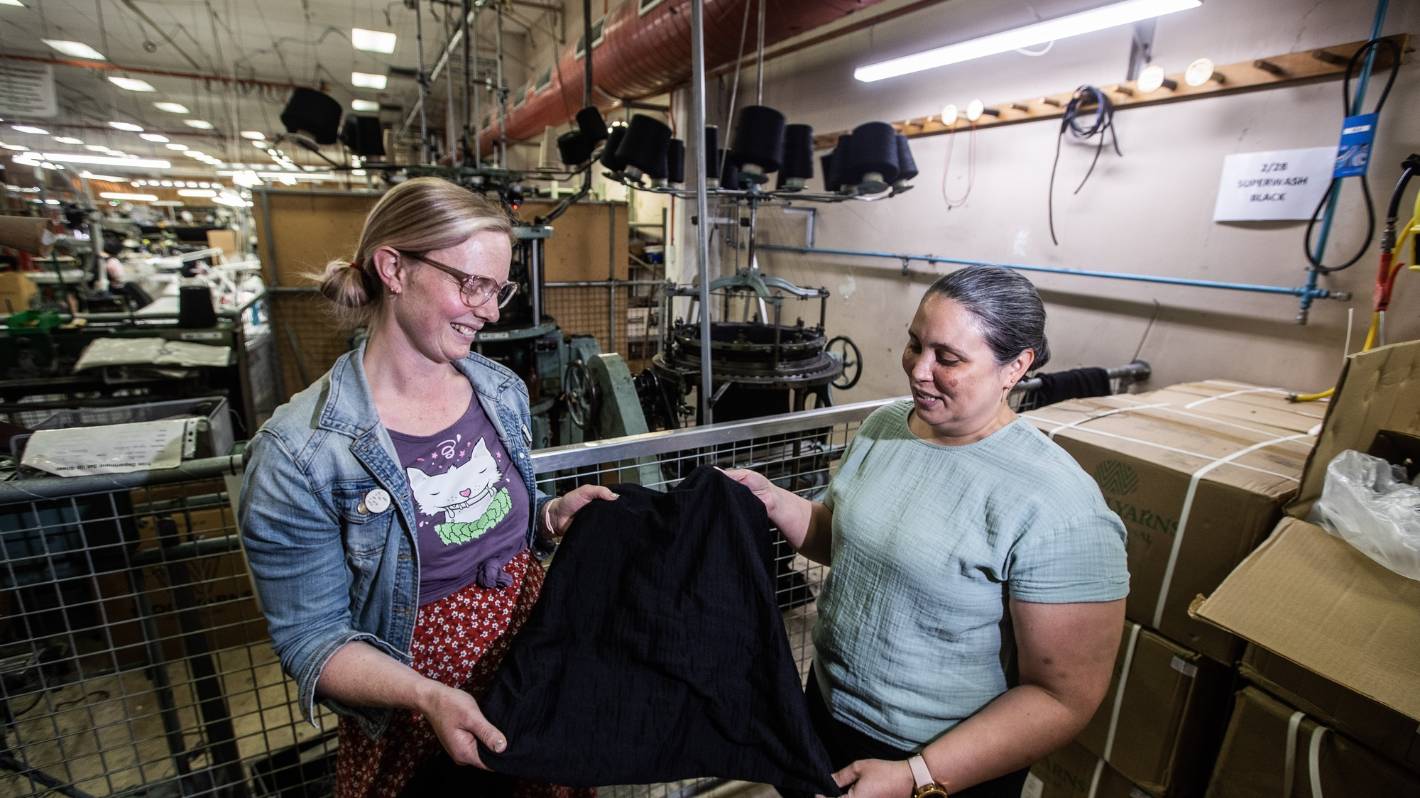 The ‘old workaholic’ who made the first All Black jersey now makes merino T-shirts for hikers who hike the national trail.

The antique knitting machine is a fitting cog in a collaboration between two Palmerston North family businesses built on sustainability and tradition.

This means hikers can purchase a top that functions both as a souvenir and as a practical garment for hiking 3,000 kilometers of trails from Cape Reinga to Bluff.

Unco, which has produced merchandise designs for Te Araroa Trust, approached Manawatū Knitting Mills with the idea of ​​teaming up on hard-wearing t-shirts that appeal to hikers.

John Myszczyszyn, who owned Manawatū Knitting Mills with his wife Sophie Hughes, said lightweight, durable clothing was important for carrying a bundle of personal effects for about 60 days, the time it would take to walk an island.

The manufacturer had been using New Zealand natural fibers to make jackets, t-shirts, gloves and hats from merino, opossum and silk for 138 years.

To make the Te Araroa t-shirts, Myszczyszyn said he turned to the “old workhorse,” a circular machine that had been in the factory since 1884.

Despite its age, the machine was in constant use. In addition to hiking t-shirts, it produced 70,000 “shear t-shirts” a year, knitted “like we did 138 years ago”.

The circular machine was still used not out of necessity, but because of its importance to the company’s past.

Myszczyszyn said the company has established relationships with around 670 retailers globally. He valued tradition and local relationships. It was in this spirit to partner with Unco, another local family business.

“The whole concept is fantastic…it’s really important that people come up with new ideas, new concepts, and then we grow with those people.”

Anthony Behrens and his daughter Ally Burleigh launched the Unco brand in 2021, normally pressing their designs onto ASColour cotton t-shirts.

Behrens, a digital designer and photographer, is a hiker himself and has been offering hiking accommodation in the Whiowhio hut built in his garden for the past five years.

Conversations with other hikers made it clear that merino was the go-to fabric, due to its softness, breathability and durability.

“If you wear a polypropylene nylon top for six months on the trail, it’s going to be gross in the end…because polypropylene retains odor,” Behrens said.

Merino t-shirts have undergone rigorous testing to ensure they are fit for purpose, and were currently being put to the ultimate test by hikers hiking the Te Araroa Trail.

“One of the hikers tested the bejesus on a. He wears it 24 hours a day when he is hiking. He wears it now as he hikes from Hamilton.

Manawatū marked the halfway point on the Te Araroa trail, which made the business partnership all the more meaningful for Behrens.

“We are at the heart of the trail. And it’s fitting that it’s happening here.

Comments from international backpackers were that the North Island was about ‘the people’ and the South Island ‘about the mountains and scenery’.

“And Palmy is the kind of crossover place where those two trail personalities change.”

Te Araroa opened in 2011. International visitors typically outnumber New Zealanders by five times. However 2021 proved the exception due to Covid with almost all hikers being Kiwis.

It was hard to predict how many walkers would use the National Trail this hiking season, but Behrens thought it would be “huge”.

The first Te Araroa merino t-shirt design is available on the Te Araroa Trail website and directly from Unco, with more designs in the works.