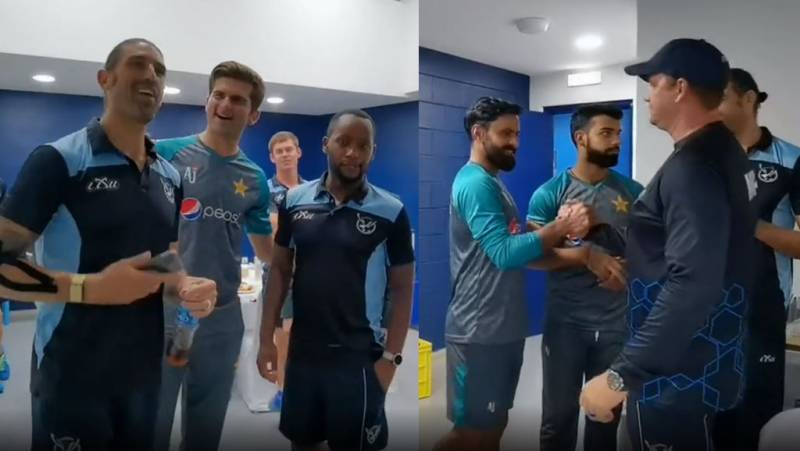 DUBAI – Men in Green captured the hearts of cricket fans and fans around the world with their positive gestures as they visited the Namibian dressing room to encourage the Erasmus-led team to take a combative approach.

In a clip shared by Pakistan Cricket Board, the Pakistani team visited the opponents’ dressing room after defeating them with a convincing loss at the ICC tournament in the United Arab Emirates.

The viral video featured Pakistani cricketers, as well as a board official, who can be seen walking into the locker room. The two sides exchanged encouraging words after an exciting game. Mohammad Hafeez, Hassan Ali, Shaheen Shah Afridi, Shadab Khan and Fakhar Zaman can be seen cheering on the Namibian team after an exciting match.

#SpiritofCricket – The Pakistani team visited the Namibia locker room to congratulate them on their trip to the @ T20WorldCup#WeHaveWeWill | # T20WorldCup pic.twitter.com/4PQwfn3PII

A PCB official told the Namibian team that they have done a great job so far playing dazzling cricket. Pakistani cricketers also interacted with Namibian players. Shaheen also hugged David Wiese and wished him good luck while â€œThe Professorâ€ shared some helpful tips with the Namibian side.

â€œThe Eaglesâ€ lost the game as they tried their best to compete with the Pakistani team with Wiese scoring 43 and Craig Williams scoring 40.

Namibia played the game with a positive approach as they continued to fight until the end of the game, barring Shaheens from forfeiting.

Meanwhile, the Pakistani squad continued their winning streak in the T20 World Cup and became the first team to reach the semi-finals. The Green Shirts beat Namibia by 45 runs in Abu Dhabi, with brilliant half centuries of Mohammad Rizwan and skipper Babar Azam.

“If Usain Bolt wore a Spurs jersey in the 100m final, he would have finished fourth”