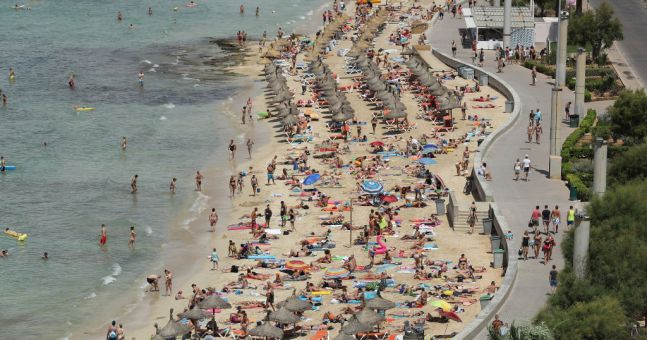 Football shirts are one of the many prohibited items of clothing.

A number of restaurants in Mallorca in Spain have banned customers from wearing football shirts and various other clothes they associate with “drunken tourism”.

The 11 restaurants that introduced the rules are based in the resort town of Playa de Palma and are associated with the Palma Beach brand.

Speaking about the problems the region is facing when it comes to tourists, Palma Beach CEO Juan Miguel Ferrer told Diario de Mallorca:

“The situation on public roads is worse today than in 2017, 2018 and 2019. We are already considering the lost season in terms of controlling incivility.”

While acknowledging police efforts to tackle the problems, Ferrer added that they were not enough to arrest “large groups of tourists who are just looking to get drunk on public roads, frontlines or even on the beach.

As part of the new rules for 11 restaurants, football shirts, swimsuits, swimming trunks, strapless tank tops and any accessories purchased from street vendors (such as gold chains or glow-in-the-dark hats ) will be prohibited.

Restaurants have also put up posters with QR codes that customers can scan to see the mandatory dress code, dubbed “chic chic”.

While the dress code will be slightly more lax during the day, Ferrer said it will be “absolutely adamant” at night.

The CEO also said the purpose of the ban is not to ban tourists but rather to “re-educate” them and make them realize that their attitudes need to change.

The new rules come after tourists were warned in April that alcohol consumption at all-inclusive hotels in parts of Spain’s Balearic Islands was now capped.

As part of the changes – which apply to Magaluf and Playa de Palma in Mallorca and Sant Antoni de Portmany in Ibiza – customers are restricted to drinking during meals.

They are also only allowed six drinks a day, including three at lunch and three at dinner.

Before the 2020 pandemic, the government of the Balearic Islands passed laws with the aim of cracking down on drunken holidays.

As part of the rules, happy hours and pub crawls are also banned at popular tourist destinations.