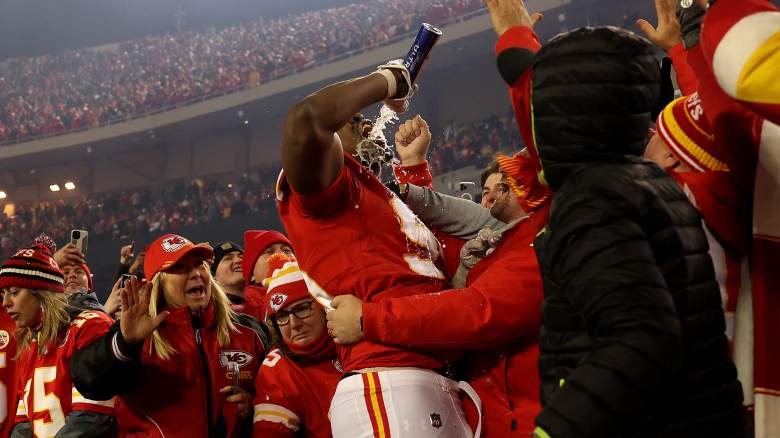 When the Kansas City Chiefs beat the Buffalo Bills in overtime in the Divisional Round of the playoffs, Arrowhead Stadium was buzzing.

Fans gathered in the stands to celebrate one of the most exciting games to take place on an NFL field in recent memory. Even Chiefs defensive tackle Chris Jones joined in the celebration.

Jones, who is known for his high energy, jumped into the stands to celebrate with the members of Chiefs Kingdom, downing a bottle of Michelob ULTRA to express his excitement for what just happened.

The fact that Jones was captured by photographers drinking a well-known beer caught the attention of Michelob ULTRA on Twitter.

StoneColdULTRA Jones sounds good, don’t you think? RT if you think there should be more festive Stone Cold ULTRA in KC’s future. https://t.co/Bhzb1eQqA6

Jones and Michelob ULTRA also noticed that there was one fan, in particular, in the viral photo who had a very different expression on his face compared to the others around Jones.

The long-faced Chiefs fan right behind Jones in the photo is Julie Collins.

Julie, 57, has had season tickets to Chiefs games in her family for nearly 45 years. His family’s subscription seats are in the front row just behind the Kansas City bench. Those premium seats are what put Julie front and center in the epic moment in which Jones drank a fan’s beer in the stands.

“After the game, everyone was jumping, celebrating and hugging. It was very fun and chaotic,” Julie told Heavy. “We were so thrilled with that win, and usually a player doesn’t jump into the stands, but all of a sudden – and I think it was because my son was wearing his ninety-five shirt, Chris Jones – but Chris Jones, here he comes, he jumped, and some of our season ticket-holding friends kind of picked him up in the stands.

But why exactly did Julie have a rather unhappy look on her face? Well, other than her beer — which was a Michelob ULTRA — spilled in the middle of the celebration involving Jones, Julie couldn’t quite see what was going on because of her perspective behind Jones. On top of that, fans from other sections were starting to crowd around her, which made things rather nerve-wracking.

Despite Julie’s split-second reaction that was captured in the photo, she wanted to say one thing very clearly to Kansas City’s star defensive tackle.

“I was very happy that [Jones] jumped into the stands. He’s welcome there anytime, and he can drink all the beer we could have, Julie said.

To fix Julie’s spilled beer, Jones and Michelob ULTRA teamed up to make sure Julie has all the ULTRA she needs before the AFC Championship game between the Chiefs and the Cincinnati Bengals.

“This Sunday, we keep @JulieCollins64‘s ULTRAs full and a smile on his face. @Chefs kingdom – are you ready?!?” said the official Michelob ULTRA Twitter account on Thursday, January 27.

In addition to the kind gesture, Jones and Michelob ULTRA also released limited-edition “Stone Cold Julie” shirts for Julie to rock during the AFC title game on Sunday, January 30, a game she will be in attendance for. .

Chiefs fans can also sport the “Stone Cold Julie” shirts on game day by purchasing their own at Shop Beer Gear website. A portion of the proceeds from the shirts will go to Kansas City’s Habitat for Humanity.

The AFC Championship Game between the Chiefs and Bengals will take place at Arrowhead Stadium at 2 p.m. Arrowhead Time on CBS.