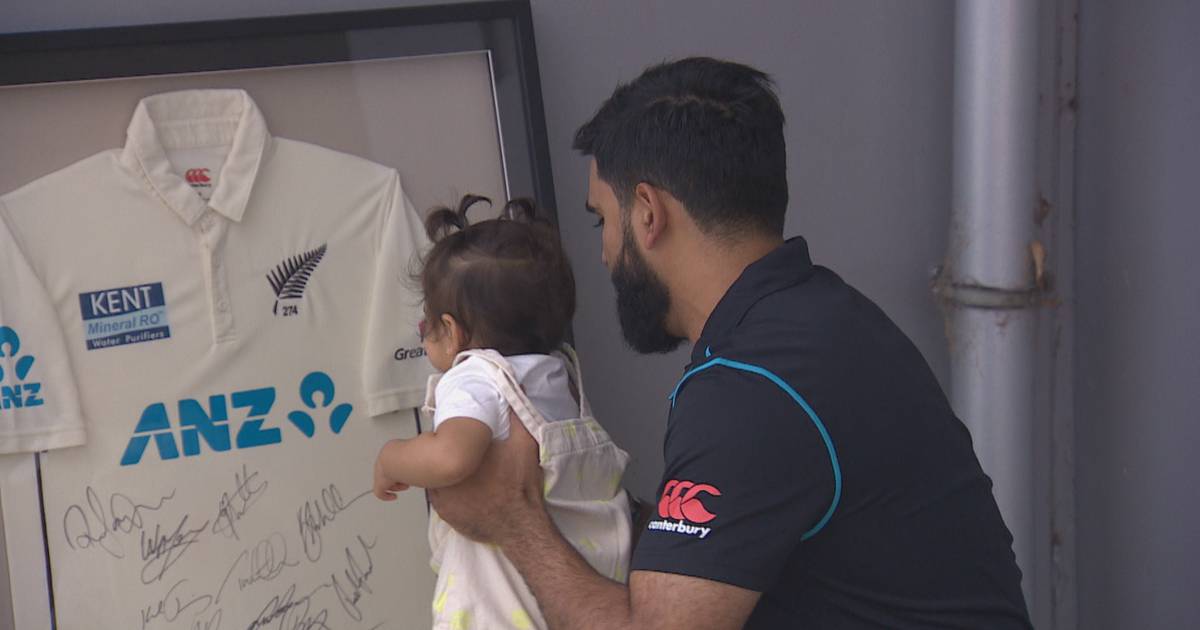 Black Caps spinner Ajaz Patel is raising money for Starship Children’s Hospital by donating one of the jerseys he wore during last year’s Mumbai Test, where he became just the third pitcher of the test to take 10 wickets in one inning.

The cause is one close to Patel’s heart after spending a few days in hospital last year when his daughter, Hania, was born.

“My daughter was born at Starship and she had a bit of a fever and they took her in for checkups and to make sure she was okay,” he explained.

“They gave her a short dose of antibiotics but during that time…she was in the neonatal intensive care unit, she didn’t really have too many problems but I remember I was sitting there with her and I remember looking around the room and there were so many vulnerable babies.

“The care and love they were getting from the nurses – I remember thinking as a first time parent, how amazing it was but how difficult it would have been for those parents.”

The money raised from the auctioned shirt will help pay for the hospital’s radiology department play specialist, who helps children cope with procedures such as MRIs without the need for general anesthesia.

“It’s something quite unique. In an adult hospital you won’t have a play specialist to teach adults how to play, in a children’s hospital it can be quite vital in calming them down and making it easier for them. Patel said.

“Being a cricketer and sport and gambling being everything, I think they saw that as a good fit and it fills a need for them as well.”

Patel said the decision was inspired by Tim Southee, who donated his Test Championship shirt to raise money for Hollie Beattie, an eight-year-old girl who was diagnosed with an aggressive form of cancer.

“The first time I really thought about it was when Tim, after the World Test Championship, donated his shirt for the Hope for Holly campaign. I saw how much New Zealanders supported and for me, if I donated out of my own pocket, I wouldn’t be able to give that much,” he said.

“If it’s something like that that people can support and we can raise a lot of money and help people, it makes it a lot easier.

“Tim was probably the catalyst in my mind, I just needed a shirt that could generate that kind of attention,” he joked.

Starship Foundation CEO Aisha Daji Punga said funds raised through the shirt will have a positive impact on children and their families.